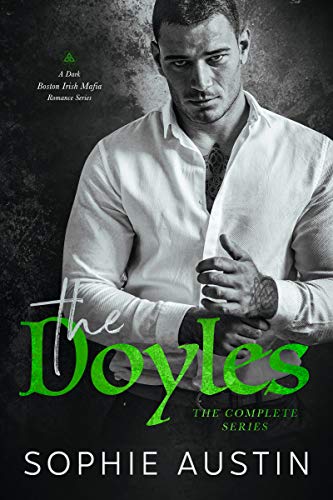 Get lost in the world of the Doyles. Dangerous men with big hearts who will do anything for their family and for the women they love.

The Doyles Complete Series includes over 400,000 words and 7 books following the Doyle brothers as they confront the fast-changing world of Boston’s mafia, meet the women that steal their hearts, and forge the next generation of the Doyle dynasty.

Knockout: Owen’s an MMA fighter trying to get out of the family’s mafia business and fiery Molly O’Brien is his best friend’s little sister. What’s a guy to do when the one woman he’s forbidden is a total knockout vying for his heart?

Grind: Connor’s a mafia nightclub manager that Ava runs into while escaping her abusive ex. Now that he’s got her, this alpha won’t let a woman in jeopardy out of his sight: not until he knows she’s safe and maybe not ever.

Hustle: Seamus is a polished, ultra-professional lawyer and middle son of the Doyles. Evi is the free-spirited tattoo artist who got away. When a common enemy unites them, sparks fly in this frenemies-to-lovers, second chance romance that shows what happens when Boston’s most uptight mob lawyer gets down and dirty.

Thug: Keiran is a mob enforcer with a musician’s soul, and when a job brings him to spend the summer on Martha’s Vineyard, he succumbs to the charms of Siobhan, daughter of the rival Carney mob family. Find out what happens in this enemies-to- lovers forbidden romance, and see whether a summer fling can turn into the love of a lifetime.

Devil: Ronan’s in charge: he’s a devil in the sheets and a mob boss in the streets. And it always worked fine until she came along: Ruby, the cop determined to put him away. When they reluctantly join forces to right an old wrong, their fake relationship threatens to ignite a passion they can’t extinguish.

Hooked: All holiday lover and event planner Sia wants is one perfect Christmas for her cousins and Uncle at the family’s house on Martha’s Vineyard. But fish shack owner and Coast Guard reservist Vin is determined to be a Grinch. Watch things heat up between the pages of this holiday love story as these two find common ground and sparks fly.

Ringer: Single father, Marine and MMA fighter Jack finds himself back in Boston, confronted with the one woman who got away: Alix, who is finally living her dream running an animal shelter. She’s being stalked by an ex and Jack won’t let her out of his sight, determined to play bodyguard and protect what’s precious at all costs. Can these two broken souls find a fresh beginning in time for the New Year?